Madagascar is the kingdom of the lemurs; these animals aren’t found anywhere else in the world. The films Madagascar and Madagascar II give you a nice first impression of what you can encounter in Madagascar. On the other hand, the films immediately put you on the wrong track: there are no lions, zebras and giraffes in Madagascar. For that you really have to go to other parts of Africa!

We have listed the different animal species from the film for you, so that you have an idea of ​​what they look like in real life and you understand how the characters in the film came about. We definitely understand that these animals were a great inspiration for the scriptwriters of the films!

Meet King Julien, the ring-tailed lemur; Maurice, the finger animal; Mort, the mouse lemur, Clover, the crowned lemur and the Fossas threaten the kingdom of King Julien in great numbers. 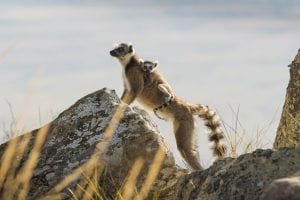 King Julien is the most famous lemur from the movie Madagascar. He is the “king of the lemurs” and rules over all other lemurs with his colorful character. King Julien loves parties, is quite full of himself and insists that everyone has a lot of fun. During the movies, King Julien grows into a good king, making himself loved by always protecting his people.

King Julien is a ring-tailed lemur and spends about a third of its time on the ground. This makes it the most “grounded” lemur compared to other species. In the morning he prefers to sunbathe to warm up (see photo).

Ring-tailed lemurs live in the south and southwest of Madagscar and are very social animals. This makes them easy to view in their natural environment. With their funny appearance, they are very nice animals to look at. 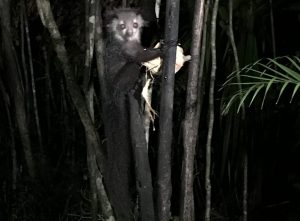 Maurice is the right hand and advisor to King Julien and friend from the very beginning. In the film, he is seen as the brain of the lemurs. He is smarter than all other lemurs and very loyal to his king. Although he thinks King Julien is bizarre, he also likes to dance and party. He always assists King Julien with his crazy plans.

Maurice is a finger animal and takes its name from the long, narrow fingers and toes with claw-like nails. The middle finger on its front leg is much thinner than the other fingers, hence the name “finger animal”.

The finger animal lives at night and is therefore a nocturnal animal. During the day he prefers to sleep high in the trees in a nest under the leaves. They mainly eat larvae. By tapping the bark of the tree with their thin middle finger, they can find the hollow spaces. This is the place where the larvae prefers to sit. They then extract the larvae from the tree with their long fingers.

The finger animal can be found in the rainforests and plantations on the east side of Madagascar. The area runs from Ampanafana in the north to Andohahela National Park in the south. The finger animal also occurs in the dry deciduous forests in northwest Madagascar. 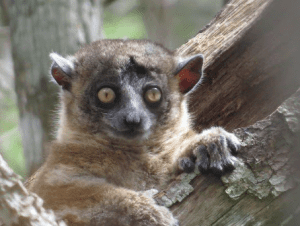 Mort is a very cute and innocent character in the movie. Mort loves feet very much and prefers to touch them all day long. Especially that of King Julien. Mort is a regular victim of horrific events, King Julien actually hates him and commands him firmly. Mort doesn’t seem to care, his love for his king’s feet is too great…

Mort is a mouse lemur. They are the smallest of the primates and reach a total body length between 23 and 29 centimeters. Mouse lemurs mainly live at night and eat flowers, fruit nectar, buds and leaves as well as small insects.

Mouse lemurs are found in all types of forests across the island, making them the most common genus in Madagascar. 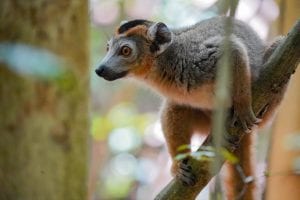 Clover is the personal bodyguard of King Julien and was previously the captain of the Ring Tail Guard. Clover takes her work very seriously and is always there when the Fossa’s threaten King Julien or her fellow lemurs. Due to her overprotective character, she sees danger everywhere, so she sometimes does not hesitate to attack, which sometimes costs her dearly.

Clover is a crowned lemur and mainly eats flowers, fruit and leaves. The males are generally brown with a gray crown, the females rather gray with a brown crown.

The crowned lemur is found only in the Ankarana Reserve in the rainforests of Montagne d’Ambre in the North of Madagascar. 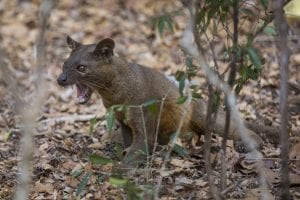 The fossas are the greatest opposites of the lemurs and therefore also their greatest enemy. They are dangerous, devilish, mean and always looking for food! They terrorize the lemurs and are constantly threatening to eat them!

Fossas have a long and slender body and look somewhat like a big cat (the name says it all). They are predators and hunt lemurs and birds from the trees. He also loves birds’ eggs. The ferret cat is a good climber and skilfully jumps from branch to branch.

Fossas only live in the forests of Madagascar.

Concluding
Madagascar is very easy to travel with children, so it is quite possible to look up the animals from the film for real. In this way, you can use the film to introduce your children to these animal species in a playful way.

Would you like to be informed without obligation about the possibilities to make a trip with children to Madagascar? Then please contact us.